At present, Baiyun International Airport has two terminals and three runways. The airspace class reaches the standard of 4F, which can satisfy the needs of taking off, landing and parking of large wide-body aircrafts such as A380. Its route network has covered more than 230 destinations around the world, including more than 90 international and regional ones, and nearly 80 Chinese and foreign airlines operate here. On May 1, 2019, the 144-hour transit visa exemption policy was officially implemented.

Located in Guangzhou, Baiyun International Airport is the largest import and export port as well as an important transportation hub in South China. With its unique geographical location and structured sea-land-air transportation system, Baiyun International Airport has the advantages of natural network covering Southeast Asia, connecting Europe, America, Australia, and radiating to major cities in the Mainland. In the future, Baiyun International Airport will build a comprehensive transport center and transfer hub integrating various traffic modes including air transportation, high-speed railway, subway, intercity rail and highway to achieve effective linkage between cities in the Pan-Pearl River Delta and the Pearl River Delta Area and the Airport. Together with Guangzhou Port and Nansha Free Trade Zone, it will play a more important role in the Belt and Road Initiative, construction of Guangdong-Hong Kong-Macao Greater Bay Area and the big structure of a new round of opening-up.

The expansion of Baiyun International Airport formally started in August 2012, including the third runway and taxiing system, Terminal 2, apron and supporting facilities like air traffic control and fuel feeding. On February 5, 2015, the third runway was put into operation, and on April 26, 2018, Terminal 2 came into use. Baiyun International Airport, with two terminal buildings and three runways, can meet the operational demands of annual take-off and landing of 620,000 flights, 80 million passengers and 2.5 million tons of cargo. In the future, Baiyun International Airport will speed up the expansion of the fourth and fifth runways, the fourth concourses in both east and west, Terminal 3, and accelerate the construction of freight facilities, thus further satisfying the growing demand for air transportation in the Pearl River Delta and South China, and expediting the construction pace of world-class aviation hub.

Guangzhou Baiyun International Airport is located in the northern part of Guangzhou. It covers an area of 18 square kilometers at the junction of Renhe Town in Baiyun District and Xinhua Town in Huadu District. The Airport is about 28 kilometers away from downtown Guangzhou. 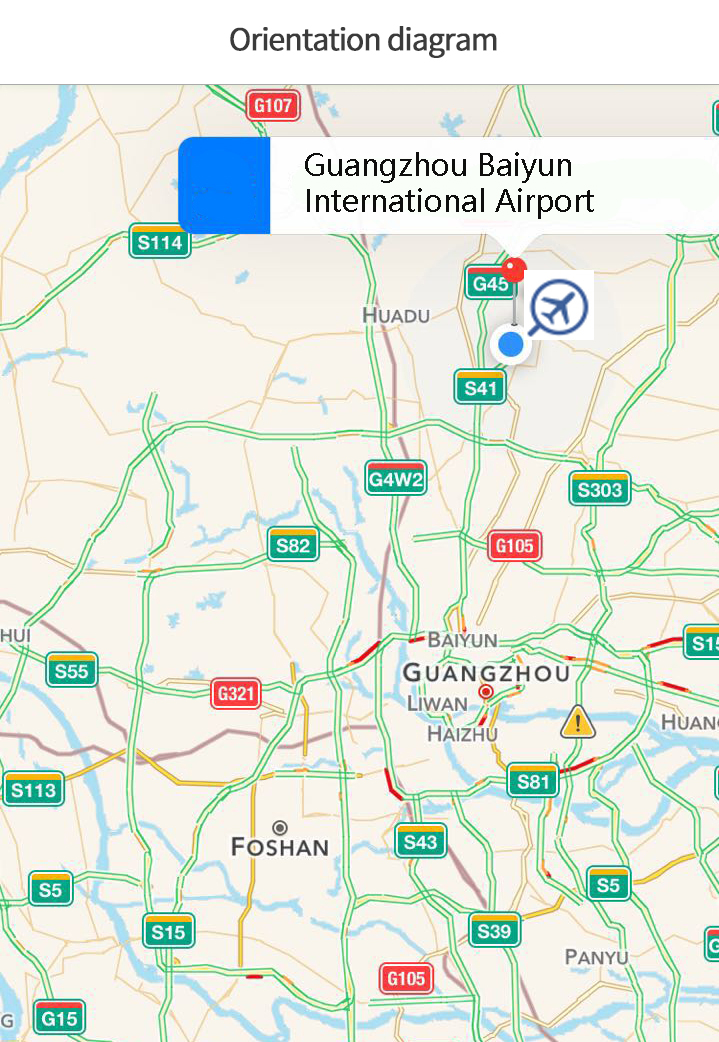 Currently, there are three runways and 269 standard aprons (including FBO). With a building area of 523,000 square meters, Terminal 1, coming into service on August 4, 2004, consists of a main building and six concourses. There are four floors in the main building, of which the ground floor leads to subway, parking lot and arrival area A and B. The first floor is mainly a commercial area, and the second and third are transit interlayer and departure hall respectively. Terminal 2 and the Integrated Transportation Center, put into use on April 26, 2018, covers an area of 880,700 square meters. It has a main building and five concourses. The main building is divided into four floors, with the arrival hall on the first, transit, domestic mixed flow and international arrival on the second, departure hall on the third, and functional areas such as catering, timing hotel and two-compartment lounge on the fourth.